Horizon holds a 100% interest in the Permit, which is located in the Aquitaine Basin of south-western France. The basin contains the largest natural gas fields in France: Lacq and Meillon, which combined have produced 11 TCF of gas to date. Hydrocarbons were sourced from the Lower Jurassic aged shales and marls, and have migrated into Jurassic and Cretaceous aged naturally fractured carbonate reservoirs contained in folded thrust sheets of the Pyrenean fold belt.

Eleven wells have been drilled in the Permit, with two of those wells testing hydrocarbons. Saucede-1 drilled in 1978 by Esso was a gas discovery flowing an average 9 MMscf/d over 19 days. It was placed on production 1981- 1985 and again in 1988 to 1993. The well produced a cumulative 1.85 BCF of gas from Lower Cretaceous and Jurassic aged naturally fractured carbonate reservoirs between 4,200 and 5,410 meters below sea level. Reservoir engineering analysis has indicated significant wellbore damage, caused by overweight drilling fluids and poor completion practices which could have resulted in poor well performance.

A number of leads have also been identified in different thrust sheets that have similar characteristics to the Saucede gas discovery at shallower depths that provide significant upside potential. 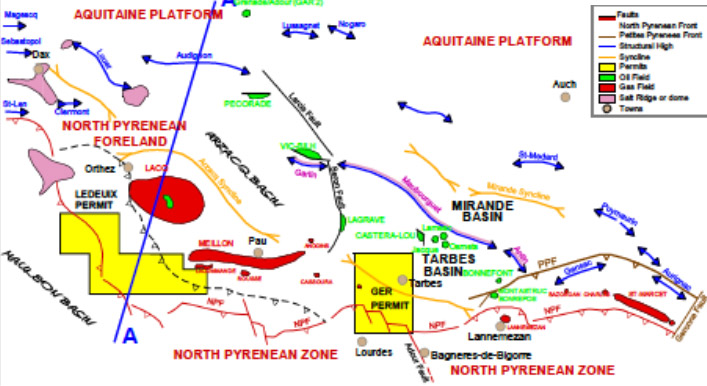 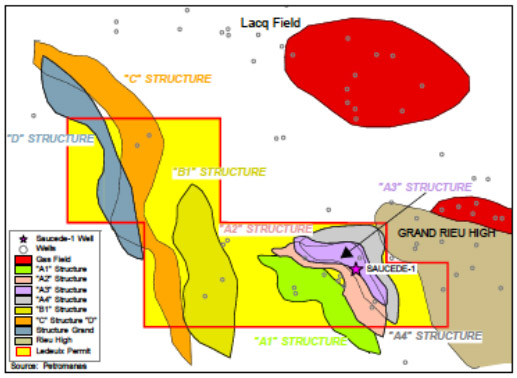