Horizon Petroleum Ltd. (the “Company” or “Horizon”) (TSXV: HPL) is pleased to report the results of an independent Resource Report prepared by Apex Energy Consultants Inc. (the “Apex Report”), of Calgary, Alberta, on the Company’s recently-acquired and 100%-owned Ledieux Exploration Permit (the “Permit”) in the Aquitaine Basin of south-western France. The Apex Report has been prepared in accordance with the standards contained in the Canadian Oil and Gas Evaluation Handbook reserve definitions that are consistent with the standards of National Instrument 51-101 (“NI 51-101“), to describe and quantify the Contingent Resources and Prospective Resources contained within the Permit.

The valuation was limited to the following scope:

The key highlights of the Report are as follows:

Horizon holds a 100% interest in the Permit, which is located in the Aquitaine Basin of south-western France. The basin contains the largest natural gas fields in France: Lacq and Meillon, which combined have produced 11 TCF of gas to date.  Hydrocarbons were sourced from the Lower Jurassic aged shales and marls, and have migrated into Jurassic and Cretaceous aged naturally fractured carbonate reservoirs contained in folded thrust sheets of the Pyrenean fold belt.

Eleven wells have been drilled in the Permit, with two of those wells testing hydrocarbons. Saucede-1 drilled in 1978 by Esso was a gas discovery flowing an average 9 MMscf/d over 19 days. It was placed on production 1981- 1985 and again in 1988 to 1993. The well produced a cumulative 1.85 BCF of gas from Lower Cretaceous and Jurassic aged naturally fractured carbonate reservoirs between 4,200 and 5,410 meters below sea level. Reservoir engineering analysis has indicated significant wellbore damage, caused by overweight drilling fluids and poor completion practices which could have resulted in poor well performance.

A number of leads have also been identified in different thrust sheets that have similar characteristics to the Saucede gas discovery at shallower depths that provide significant upside potential.

The Apex Report documents the results of its independent evaluation with Tables summarizing the total Company gross and net, unrisked and risked Contingent and Prospective Resource volumes. The volumes were estimated using stochastic techniques.

The “A-2, A-3 and A-4” Reservoirs contain Contingent Conventional Natural Gas Resources as defined in the Canadian Oil and Gas Handbook and summarized below. Based upon Apex’s evaluation, the Saucède-1 well was a discovery well and is located on the downdip edge of an undeveloped gas field. The well was placed on production at an initial rate of 1.5 MMscfd, producing a total of 1.85 Bcf of conventional sweet gas before being shut in at a rate of approximately 0.46 MMscfd. The poor production performance of the well was attributed to the poor operating and completions practices when the well was drilled and tested. Based on the reservoir test data, Apex estimate an initial production rate of 25 – 30 MMscf/d per well with an appropriate completion.

The Saucède-1 well is shown by seismic data to be part of a large structure comprising three separate thrust sheets, and additional Contingent Resources were assigned to the remainder of the A2, A-3 and A-4 reservoirs penetrated by the Saucede-1 well. The main contingencies relate to the future successful completion of new production wells, the development of the gas processing infrastructure and the negotiation to access the regional infrastructure, and gas marketing agreements to sell the natural gas. Approximately 60% of the Contingent Resources are contained in the A2 reservoir between 4,200m and 4,800m. Horizon plans to target the A2 reservoir for an initial development on the Saucede discovery with the deeper A3 and A4 reservoirs being targeted later once cash flow has been established from the A2 reservoir.

The Permit contains other prospects that will require drilling to test the Undiscovered Prospective Resources. There are sufficient geological and geophysical interpretations that in the opinion of Apex Energy Consultants allow for the estimation of a Prospective Resource as defined in the body of the Report:

Prospective Resources are those quantities of petroleum estimated, as of a given date, to be potentially recoverable from undiscovered accumulations by application of future development projects. There is no certainty that any portion of the Resources will be discovered. If discovered, there is no certainty that it will be commercially viable to produce any portion of the resources.

Contingent Resources are those quantities of petroleum estimated, as of a given date, to be potentially recoverable from known accumulations, but the applied projects are not yet considered mature enough for commercial development due to one or more contingencies.

Summary of the Report

The Report focuses on the Saucède – 1 gas discovery well, which was drilled to sufficient depth to intersect prospective horizons in the Permit. It was the only well in the Permit to produce from the naturally fractured carbonate reservoirs in the thrust sheets referred to as the A2, A3 and A4 thrust sheets. While the well was successfully drilled it was not successfully completed which had negative impact on the eventual production of conventional natural gas from the well. Conventional Natural Gas refers to natural gas that can be produced from reservoirs using traditional drilling, pumping and compression techniques. 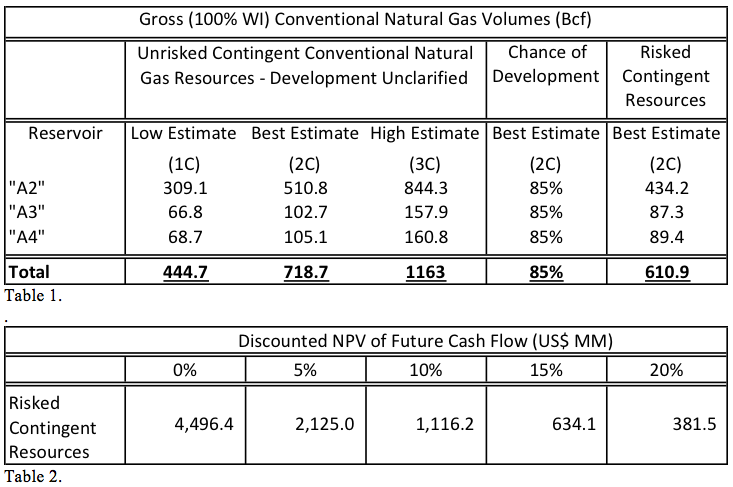 Prospective Resources were assigned to two undrilled structures in the Permit that were not previously tested by drilling. These present significant upside potential to the Permit:

Exploration and Development Strategy for the Permit

The French government has recently stated that it will no longer issue exploration permits.   As well, the extension of current concessions will be gradually limited until they are phased out by 2040.   The French government has also recently stated that it plans to pass legislation this year to phase out all oil and gas exploration and production by 2040.

This will not impact the Permit because it is an existing exploration permit.   Furthermore, the Company intends to meet its financial commits on the Permit, which would ensure its continuance.   Horizon management will be meeting with representatives of the BEPH (Bureau Exploration-Production des Hydrocarbures) in Paris in October, to discuss the Company’s plans for its Permit.

The Permit presents an opportunity to appraise and potentially develop Contingent Conventional Natural Gas Resources in a basin with ample existing gas infrastructure, and a well-developed gas market. Management and Directors of Horizon have expertise and experience in appraising, developing and monetizing naturally fractured reservoirs around the world with a number of oil and gas companies. Horizon’s strategy is to leverage that experience to target, acquire, develop and monetize these permits as well as similar gas resources in Europe. The scale of the target resource plays is such that they are immaterial to the large independents and major oil and gas companies but highly material to junior independents that have the technical and operating expertise and experience. The permits in France represent the first step in executing this strategy, and management has identified a number of potential follow up opportunities with significant undeveloped gas resources.

Although Horizon believes that the material factors, expectations and assumptions expressed in such forward-looking statements are reasonable based on information available to it on the date such statements were made, no assurances can be given as to future results, levels of activity and achievements and such statements are not guarantees of future performance.